How Did I Take a Baby To A Movie Theater?

Everyone has their opinions on what age a child should first experience movies at a theater - Should you listen? 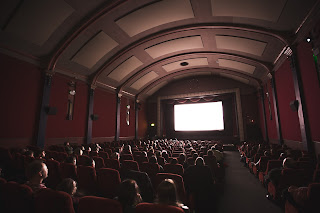 I love movies - I was the type of person that found it imperative to see a movie the first day/weekend it premiered.  If I could be invited to some early screenings, I was totally there. I'd be angry if my schedule required me to see those favorite movies on my list on the 3rd week or later.  So when I got pregnant, I lamented the thought of waiting until a movie went to DVD or digital.

I started reading the internet and the dichotomy of positive and negative opinions on the subject: To take or not to take your baby/toddler to a movie. Some people were even saying kids shouldn't even be at the theater for rated G movies (who would be at those movies, then?)  because they may not know how to be quiet/behave.  I came to realization that getting advice from the internet wouldn't be beneficial for me.  I wanted to break traditions and think outside the box a bit. 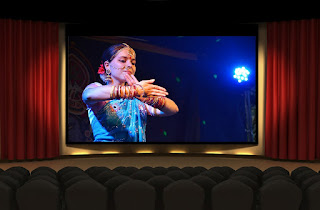 After my son was born, I decided to watch him and his temperament around certain stimuli - loud family picnics and dinners and amusement parks, shopping malls and even worship & praise service at church (which is becoming more and more like a concert).  I liked how he handled them all, remaining calm and happy- or just sleeping through it all.  After watching my baby sleep through the surround sound theater system and the 3D large screen tv my husband created, I figured it would be okay to test the actual movie theater.

I wanted to see a PG rated movie that I figured would have a few loud scenes, and chose that as the 'transitory movie pilot' for my experiment.  I made sure we had everything we thought he might need; including having his favorite blanket and his bottles on deck.  I had a sound reducing hat (HUSH Hat) that I placed on his head that also kept his head warm in the chilly theater.  We got there around the time I figured he'd be napping, and I fed him during the Lights On commercials.  By the time the previews started, he was already gone to dream world.  I held him so that I could feel if he'd be startled.  But he never flinched.  He was still sleep when we placed him into his carseat for the drive home.  I felt relieved and ready to try it again.

Kids are much more than what we give them credit for.  It's up to parents alone to know their child's personalities, limitations, and temperaments so that they can make a decision accordingly.  I was raised up on the premise that kids will never learn how to behave in certain situations until they are placed into those situations.  I see a lot of 7 or 8 year old kids at the movies for the first time, and they still exhibit some of the behaviors of a young moviegoer; talking too loud during the movie, getting up and walking over to other family members in their party while effectively blocking your view of the movie, and even screaming during action or intense scenes (intense as rated PG gets).  My son absolutely demands to see a movie each week, and has never screamed.  He pointed out a favorite character ("Iron Man, Mommy!") aloud when he was 2, but quickly learned by my shhh's that this was inappropriate - within minutes.  Now, at 3 he's a "pro".  We rarely even have to leave the theater during the movie for potty breaks anymore.  He sits quietly and eats his popcorn and candy, fully enjoying his experience, and whispering to me if he has a comment.  People have asked us how he's so well behaved, and I reply that this is because he was immersed at a young age and took social cues from everyone else on how to behave at a theater. 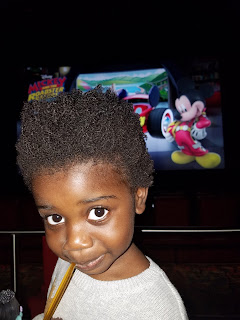 So while there will always be parents shunning those making this choice, if your child can handle it, go for it. Have those great experiences that they remember for many years. Not all children should be held back from doing what they love simply because some kids can't handle it.  Discern your child's capabilities and act accordingly.
Posted by Ele at 11:40 AM No comments:

I hear constantly on the news that our country is becoming more and more polarized, as it seems that voter views are less cooperative and "center-aisle," but more increasingly divided.  We have always had factions within each party, but it appeared that as early as 25 years ago, people were more likely to truly "reach across the aisle" to reach a compromise for the good of the country.  This allowed for our country to focus more upon the things that mattered:

Don't get me wrong, the idea of war has always loomed over us like a dark cloud, and there have been some that have fully embraced and encouraged it -for whatever reason - but it seems now that people are crazier; just up and deciding to kill innocent strangers that they might encounter on the streets, or pushing propaganda to spark wars because they have significant investments in defense equipment.  Long gone are the days where you can leave your doors unlocked, but now it seems you can't even drive home or walk along the sidewalk.  Legislation has been proposed to control violence, but they're constantly blocked because either the person sponsoring the bill is part of the "enemy party", or because legislators have become puppets of the lobbyists that support them. Whenever we think we're getting somewhere, the next group comes in an removes any progress made. We send troops to a region, the next administration takes them away without a solid strategy.  We set up laws to improve the environment or transform our healthcare, and our successors start removing those as soon as they take office instead of acknowledging the good intent, and working to improve upon the areas of those laws that need improvement.  It's no wonder so many polls reveal we don't feel any safer than we did a little after 9/11.
Then in 2002:

Recently, 4th quarter 2016 poll:
And remember we are not just fearing our safety from external terror.  There are many forms of terror arising within our own borders.  Random disgruntled or mentally disturbed people are shooting random strangers at movies theatres, malls, churches, and schools.  Bigotry, racism, sexism, xenophobia and homophobia are on the rise, and people are acting on impulses more than ever. Large corporations are treating both its employees and its customers more like easily replaced commodities than humans. Neither political party has provided us with a sound direction for easing the tension and fear. Something as simple as mandating recurring mental health screenings in order to retain a lawful firearm license could help combat issues... but that would never become law. While we can argue this could be due mostly to political obstructionism, there still lies the responsibility to respect all opinions and cooperate for the greater good.   Would Steve Stephens have been able to kill Robert Godwin if a proper mental health screen was done?  Maybe- but it most likely wouldn't have been done with a legally purchased gun, and would have reduced the likelihood of the death.  We'll never know. We've got to stop with the party-against-party model and work together.

It seems like those days where you work your way up the education system to have a leadership role have departed. Now, you can sit on a board or obtain a leadership position if you donate enough money and align yourself with other well off donors and lobbyists.  Next thing you know, your child's education is in the hands of someone like this just because of we utilize electoral college versus popular vote.  Cabinet members full of people that didn't even have to campaign.  We have a very limited understanding of their viewpoints and in what direction they'd move the federal department they've been cherry picked to run.  Then the next administration could very well dismantle (for better or worse) what was put in place by the current administration. Over time, we see that our country is pretty much at a stalemate...moving forward at a crawl pace, if moving at all. We need to push past all of this back and forth, and actually make progress for our country, for our youth, and for our safety.  Maybe, just maybe, it would benefit us as a whole to have more independent thinkers and those willing to work with others (not just give rhetoric) to actually get something accomplished.

These are my opinions- just opinions - on why those considered Moderate Republicans or Blue-dog Democrats should resurface and let their voices be heard again.  Why is it so wrong to think progressively while also valuing a great defense program for your country? Why can't you have a mix of liberal and conservative ideals in this country anymore without being attacked for not being a loyal party member? Aren't we all here to support the growth and strength of our country?  Why do you have to choose one side or the other? Humans are an ever-evolving species, so why can't our politics evolve accordingly to better our society and WORK TOGETHER for a change?