Why Pottying finally Clicked - for me and my son 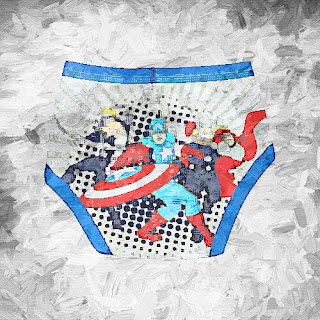 I started trying to potty train my son at 2.5 years of age.  I waited until then because he showed no sign of wanting to potty prior to that, and I started getting a bit spooked once he turned 2.5, so I figured why not.  Fast forward a year later, and he's finally going the whole day and most nights dry in his "big boy" undies.  I don't want you going through what I went through, so I wanted to share a few tips that made pottying sync quickly.

Tip #5
This one's simple. Try not to call the pull-ups diapers. You may even be better to call them underwear.  I know a lot of parents know this already, but for those that could possibly slip-up, remember this.  It seemed to be a big catalyst in the change in his behavior once I realized that and fashioned his favorite character underwear over the pull-up as a disguise, calling it underwear.  I made sure I reiterated how they should never be wet.

Tip #4
Give them a reason to pull down their pants. Some children are excited about flushing the toilet, but mine wasn't.  A lot of people say to let them aim for cheerios, but I couldn't even get that far. He'd run from the toilet. He liked raisins, and that was a breakthrough for me. He soon became quite slick - withholding some of the urine so he could potty multiple times within a few minutes for more raisins.  I also allowed him to wear his favorite pajamas and underwear when he'd gone to the potty and remained dry that day. He enjoyed showing off his Avengers underwear when he pulled his pants down.


Tip #3
Don't go at it alone.  Everyone at the house should participate in the program, reminding him on a 30-60 minute schedule that it's pottytime.  We made pottytime into a party, expressing excitement as we danced into the bathroom. (We even sang our own pottytime song!)  Initially it was met with fierce opposition, but we wore him down. Everyone was in on it, including the grandparents and daycare teachers.

Tip #2
Just because you see a couple signs that he may be ready doesn't mean he truly is.  I'd read an article in the Parenting magazine that some of the signs your child was ready to potty were
1. They look for privacy to complete #2's.
2. Can follow basic directions. A 1yr old can follow directions, but still may not be interested in following a potty directive.
3. Seems interested in the toilet.  My son was interested all right until it was time to sit down on one. Oh the screams of terror even on his own potty.
4. Sit down and get up from potty. He would do it, but had no intention of making a deposit.
5. Poops on a predictable schedule.  My son definitely did that. but would suck it back up when he was placed on the potty - and would wait for long periods of time if needed until the diaper was back on before relieving himself.

I soon realized that the list of "signs" was to be used as a loose guideline, not as gospel, for understanding when your child is ready to potty.

Tip #1
Your child will potty on their own timetable, not yours or anyone else's.  Never mind that I started at 9-10 months (per my mom), my son was simply not ready at that time, and he couldn't care less about how embarrassed it made me, or how much treats he missed out on.  I toiled many days trying to get him engaged in the process; offering bribes, showing my disappointment, etc.  His will didn't budge until he was ready.  Once that happened, I was able to use positive reinforcement to motivate him (praise,sweets, his favorite pj's and underwear) to get him trained.

You need to be patient and know that it will happen, but just not all on your terms.  When you let go of your frantic demeanor, your child will relax too, and come into their own at the right time for them.
Posted by Ele Millenia at 5:06 PM

Email ThisBlogThis!Share to TwitterShare to FacebookShare to Pinterest
Labels: Toddler