Will your toddler/preschooler love Disney World's Pandora:World of Avatar?

We loved the movie.  My preschooler was not even born when the movie was released, but my husband had the bluray 3-D disc and my son began his love for Avatar with the amazing colored visuals that seemed to pop right into your family room.  As he aged into a toddler, he began to recognize characters and become more engaged in the plot as well.  Even now, it is one of the movies that can hold his attention in its entirety.  So it was only natural that when we heard of a world of Avatar coming to Disney's Animal Kingdom, we'd make haste to see it for ourselves. Disney World advertised that we'd "immerse" ourselves in this world, and we sure were ready to do just that.  But here's why we were underwhelmed after visiting:

1.  The lack of cutting edge biochemical luminescence that Disney alluded to. 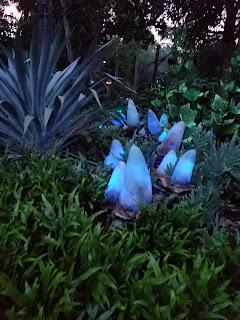 In the months leading up to the opening, there were many Disney sound bites and video snippets of professional interviews with those integral with the creation of Pandora here on earth - saying how advanced this land would be to the Animal Kingdom.  They spoke about bio-luminescence and how they were going to integrate that with their land.  I almost peed in my pants with excitement. I knew it would be possible because I'd read articles about glow-in-the-dark trees.  I also didn't think it was far-fetched for Disney as they had the wherewith all to bring that dream to fruition.
But we noticed that although you can interact with the plants by placing your hands in certain areas on the plants, they were not bio reactions, but more so technological reactions. There was a lot of black light usage at night plants that looked more like lamps than actual plants.  That was disappointing. My son seemed fooled enough though, so I was okay with it.

2. No Animals/No Na'Vi
What made the movie was due in part to the interesting animals the Na'Vi people interacted with, and how they were part of the balance of the plant.  I searched everywhere for animatronic dinosaur-like creatures that we were introduced to on the movie.  NOT A ONE animal or Na'Vi person.   The whole planet at Animal Kingdom is just plants and water.  The only animals/indigenous people you see from the movie are in the two attractions - the rest of the planet was just there to serve as a queue for the attractions. 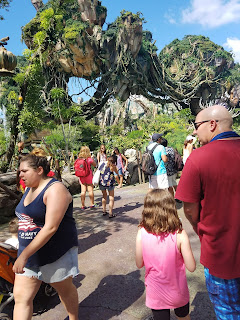 There are only two ride attractions in this 'planet' so naturally there were long lines of people waiting.  The only issue is that with a preschooler/toddler, there is only one ride we could enjoy, due to height restrictions for the Flight of Passage. So of course all we could do was River Journey - although the aesthetics were great - and we loved the animatronic Shaman and the overall environment - we were hoping for some kind of story line or way for us to interact.  In the Pirates of the Caribbean ride at Disney's Magic Kingdom, we feel as though we are now pirates, following the crew along on their quests, and even immersed within one of their battle scenes.  There was action and suspense on the Avatar movie as well, and this could have played out on the River Journey ride.

Basically Pandora is great to experience at least once, but I can't see it being a land that brings a lot of return guests within a few years.  You just keep feeling that something is missing as you roam through the area, and it gives off a rushed appearance; like they ran out of time developing and implementing, so they made a lot of cuts.  There is a wide expectation/rumor that the land will be expanded around the time that the newest Avatar movie is released, so we are hoping Disney takes its time and provides us with the space to be truly "fully immersed".

Headed to Disney World soon or thinking of taking a trip? READ more about taking a toddler.