(Trying to Decide where to stay in DisneyWorld?  Read a RESORT REVIEW to help)

As we are planning our upcoming trip to Disney, I thought it would be great to share our son's first trip to Walt Disney World with Ele Millenia's readers.  We absolutely love Disney.  It brings to life the characters of the cartoons, movies, and shows that we've watched.  Imagine having your favorite movie, and then somehow being able to immerse yourself in that environment, effectively becoming a part of the movie yourself- or at least having that feeling. 😁😁😁😁😁 Usually, I'm not the extrovert, and prefer to be behind the scenes showcasing someone else, but here I can feel like I'm also a star of the show.  I grew up during the era of powerhouse Disney movie releases like Beauty and the Beast, The Lion King, and The Little Mermaid, so of course being able to share those memories with my children is something I'd look forward to.


My husband is not a big fan of amusement parks (we're trying to wear him down), so for most of our trips, I'd have to go without him.  For my son's first trip, though we all went with my parents since they were excited to go themselves to see my son's first reaction---well, at least my mom was excited.  My dad feels like my husband on the matter.  He and my husband spent a lot of time at the resort while us women took our children out to the theme parks, and we'd meet back at the resort for lunch and dinner. 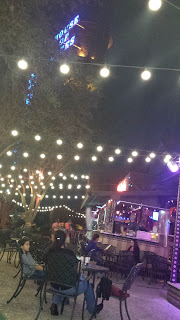 The boys in our family were 1 & 2 at the time we visited for Christmas, and I appeared to be more excited than my son, but I expected it because he was always quite reserved.  As we drove through the gate of Disney World, he showed signs of excitement, and then became more alive as we got settled into the resort and interacted-alongside other families-with the snow generated from the machines in the lobby.  He was happily jumping around the lobby and having a blast.  This carried over to Disney Springs, where we ate dinner and bought a few Disney products.  He happily ate his food and had smiles on his face the whole time.  By the time we saw the new Star Wars movie at the AMC Theatre within the Springs, we was fast asleep.  TIP: I recommend having a travel stroller with you on the trip so you can tuck your toddler in for sleeping while you walk. You can rent one from the parks, but it's based upon availability.  If you flew, chances are that you'd benefit from a stroller while in the airport as well, so you might was well save money by bringing your own.  Your toddler will appreciate having something recognizable during a period of heightened stimulation due to all the new experiences.

The next day we visited Magic Kingdom. Without the men.  But who knew we'd forget they weren't there?  TIP: If you're a single mom or your husband refuses to go, find a girlfriend, or family member and go!  It will be just as fun. I am actually even thinking of going alone with my son once he gets 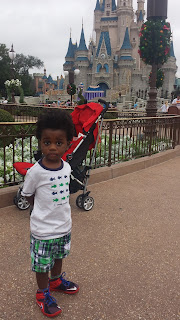 older.  Again, I advise you bring your stroller, as my son was got a little scared of the sheer number of people at first, and used the stroller as his safety zone; refusing to leave it until we saw Mickey & friends at Cinderella's castle during the park welcoming show.  He then was more than willing to get out when we headed over to Fantasyland to ride on the Winnie the Pooh attraction.  Although he was too small for the Seven Dwarf's Mine train ride, we rode many other rides without him refusing:  It's a Small World, the little Mermaid, the Barnstormer, and the steam boat ride, which put us at Liberty Square  just in time for the Very Merry Christmas parade. By this time it was time for lunch and my son was starting to revert back to his stroller.  I knew that was a signal that he was tired.  TIP: when you see signs of your child getting tired, that's the best time to leave the park and head to the resort for a nap.  We left to find the rest of our party, ate, walked about the resort grounds for a spell, and then went inside to sleep.   I find that planning to leave at lunch and return to the park after dinner works best for our family.  We went during the busy season, and the parks stay open until 11pm (or later during extra magic hours), so returning at 6pm was okay for us if the parks didn't close until 1am. Once we return to the park, we're refreshed and ready to re-commence.  We did this for the rest of our time there- and limited our total stay to just 4 days to avoid burn out from either the adults or the children.  I would recommend that you not visit the park each day of your visit unless your situation calls for it.  The extra day or two of down time allows you to experience Disney Springs and the amenities the resort you're staying at offers, like pools, cycling, arcades, golf, spas, etc.

Characters: My son was amazed when he saw the characters, but as they approached, he retreated!  He would run the other way with sheer terror on his face... I mean, who KNEW Doc McStuffins and Mickey would be SO BIG?!  He preferred to sit down and just watch the characters from afar, and I was fine with waiting until he felt more comfortable. As he became more familiar, I would remain quite close to him as we approached a character, informing them that it was his first time and he was shy so that they weren't too assertive.  It worked out well, and soon he was on his way to initiating contact with them.  I wouldn't worry if it takes a few visits for your child to become comfortable.

Dining? Easy breezy.  Staying on property provides you with so many options you won't need to leave Disney World at all.  And that is their plan.  Their quick service is similar to a fast food or casual restaurant and allows for families to eat and get back to their fun. The table service options were great ways to see characters while you dined, and choose from plated or buffet styles.  With children under 3, they are allowed to eat off of your plate to save you some extra money.  If they require special plates of their own, ask the server to simply bring out a separate plate that you can use to share your food and also be able to give them their independence. At this age, they get pleasure from being able to do things on their own. TIP:  Bring their sippy cup if they have not yet mastered the use of straws or drinking. 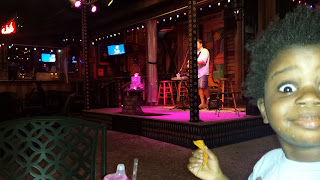 One thing to remember is that while we adults may seem more excited to get to Disney World the first time, your child most likely will be the one most excited for subsequent visits.  They have to have time as little ones to digest what they are experiencing and fully decide if they enjoyed it.  Once they become more comfortable with the excitement, they will display their feelings more. This is speaking for your first child.  Your 2nd and third has the preceding children's emotions to use as a reference for how they should feel/behave.